Whilst researching the recent post on the effectiveness of the Queensland shark culling program I came across a great database cataloging global shark attacks. For Australia there have been 904 unprovoked shark attacks since 1790, of those, 259 (29%) have been fatal. Thirty-seven percent of the shark attacks have been in New South Wales. Not that NSW necessarily has a high proportion of vicious shark species, but rather the numbers reflect the high number of bathers enjoying the great NSW beaches.

Figure 1:The number of unprovoked shark attacks by region (source data from the shark attack database)

Figure 2:The number of unprovoked shark attacks by region for each decade – click on a region to see the underlying data (source data from the shark attack database)

When do most attacks occur? 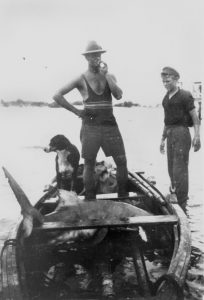 We cannot control for the relative exposure (number of beach goers) to see where you are are more likely to get taken by a shark, but we can look at the activities that shark victims where engaged in when taken. There are a total of 791 unprovoked attacks for which an activity has been recorded. I have lumped these activities into swimming, surfing, diving, fishing and boating (Figure 3). I am not surprised that most attacks are on swimmers (there are a lot more of them). But I am surprised that 45% of attacks on swimmers are fatal compared to 20% of attacks on other activities. I expected to find that diving (including snorkelling, spearfishing) and surfing would have a lower survivability because these activities often take place in isolated locations with limited access to speedy medical support. Surfers die in under 10% of shark attacks (diving 29%).

What is really disturbing about the database is the epically bad day that some of these victims had:

Before you get worried about going for a surf, for the period from 2010-2015 there where 16 fatal shark attacks compared to 7,508 road fatalities in Australia.

The data visualisations from this post are contained within their own Dashboard. You can link to the Dashboard, or use the shortcode from the visualisations to embed them in another web page.
The viz’s are easy to make. All you need to do is create a free Truii account to create and publish your own data visualizations.
Don’t forget to sign up to Truii’s news and posts (form on the right).

Crocodiles in Queensland – where not to swim?
Scroll to top