The 2014 Commonwealth Games are now finished. Congratulations to Scotland for a great games and England for a superior medal tally. Time for a quick check on our prediction attempt.

Quick recap on our prediction

We constructed a simple regression model of past games performances and used population and GDP as predictor variables. The argument being that a large wealthy nation will tend to spend more on sporting programs and ultimately provide more opportunities for gold medal performances. We fitted an average model across all nations across all years. We noticed that some countries consistently do better than the average (and some do worse). For the top countries we provided a secondary fit allowing for their over/under performance and then came up with an overall medal table for the top 10 nations. Table 1 shows how we went with the prediction.

We suggested that prediction within 30% would be pretty good. We got Australia, England, Canada, South Africa, and Singapore within 30% – so that’s five out of ten. However we under-predicted Scotland, Wales and Northern Ireland by a fair margin (see home advantage below). We also way over predicted India, Malaysia, Pakistan and Bangladesh by a fair margin.

In our initial prediction populous and relatively poor countries (India, Malaysia, Pakistan and Bangladesh) were predicted to do a lot better than they did. This is partly due to the inaccurate GDP forecast used, but more likely that for a given GDP there isn’t a linear relationship between population and medals. Our simple model just doesn’t cut it for populous nations.

The initial prediction took no account of home advantage. That is, having the games in your country (or one nearby) may have a huge influence on the medals won. This is probably partly due to the home ground advantage, but also due to the home country being very active in supporting sporting programs in the lead up to the games. For 2014, England, Scotland, Wales and Northern Island all did better than their historic performance would suggest (Figure1 and Figure 2). 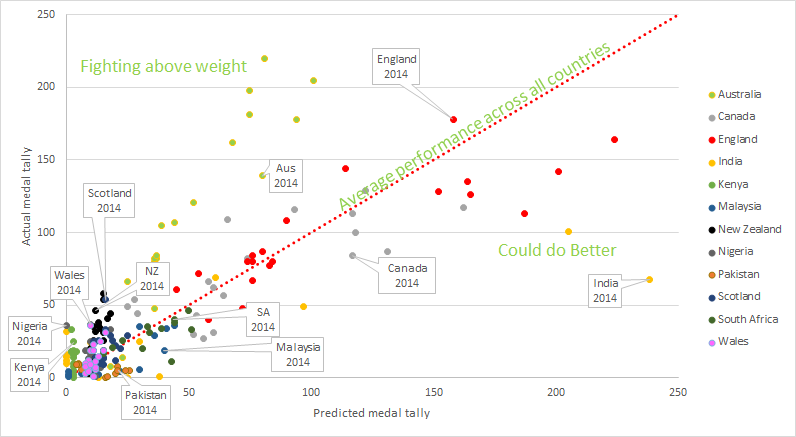 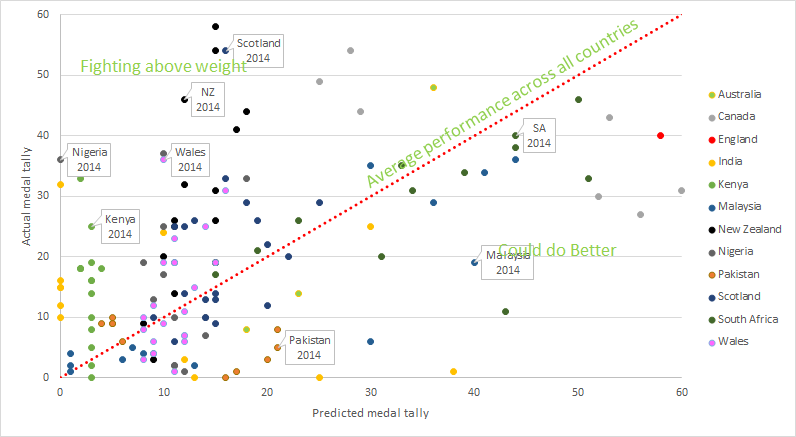 Rather than compare across nations – in which India looks to have done particularly poorly in 2014, and New Zealand to have done particularly well. Maybe we should look at the 2014 performance of each nation compared to their historic performance. A comparison of the medals won in 2014 compared to the average number for that country across all the games they have competed in. We corrected for the different numbers of events through time as if there were 261 events at each previous games. This comparison (Table 2) shows who has out done themselves this year. Table 2 only shows those countries with 20 or more medals. The winner is India – thanks largely to consistently low historic medal counts. Jamaica, Nigeria, Wales, Scotland and Northern Ireland have also done exceptionally well with 40%-80% more medals than usual. By this count Australia is way down the bottom of the list – collecting 25% less of the total medals on offer than usual – no wonder this type of analysis isn’t done very often.

Table 2: Countries performance in 2014 compared to their historic performance.

The data on Truii (Sample data/blog) has been updated to include the 2014 results.

The viz’s are easy to make . All you need to do is create a free Truii account to create and publish your own data visualizations.
Don’t forget to sign up to Truii’s news and posts (form on the right).

AFL: Why do you get a point for missing?
Scroll to top