Prediction: Australia to win the medal tally for 2014 Glasgow Commonwealth Games. Followed by India, and England.

The opening ceremony of the 2014 Commonwealth Games is underway as I write this. For those not familiar, the Commonwealth Games are held every four years between all the former British colonies. There are around 200 events which are contested by 72 countries. It is a big deal for Aussie sports enthusiast because the USA, Russia and China are not there so Australia usually looks pretty good in the medal tally.

I started researching this blog when asked “which is the best sporting nation?”. We might wait until the Olympic Games to answer that one, but I wondered about how you answer that question. I have used the collective history of the Commonwealth Games to test an approach. My starting proposition was that simple medal tally is clearly not a fair measure if you come from a small nation. The obvious solution is to scale the medal tally by the population. But again I don’t think this is fair. A child in the slums of Calcutta does not have the same opportunities as a child growing up on even the most remote cattle station in Australia. In order to standardise the medal tally I combined both the population and the Gross Domestic Product per person(GDP). In this way, your country’s opportunity to do well at sport is a combination of your collective gene pool (population) and the national wealth which creates the opportunities for sporting endeavours rather than just surviving.

I created a simple regression model where I correlated the medal tally from all the Commonwealth Games (19 so far) with population and GDP (normalised across time). The model was a pretty good fit with 70% of the variance in medal tally explained by the combined variables (similar results for each of gold silver and bronze but these are not shown here).

If we compare the relative success of each country against the overall average success as predicted by the model based on population and GDP (Figure 1 and 2). Then those that are near the line are performing to their opportunities (Canada, Malaysia, Scotland). Those below the line are not doing as well as one would expect given their population and wealth (England, South Africa). Those above the line are fighting well above their weight (Australia, New Zealand, Wales). Then there is India, sometimes brilliant, sometimes not. The simple GDP measure that I used has a big influence on India’s predicted performance given their prodigious growth over the last century, and perhaps this approach simply doesn’t reflect India’s cultural interest in the games. 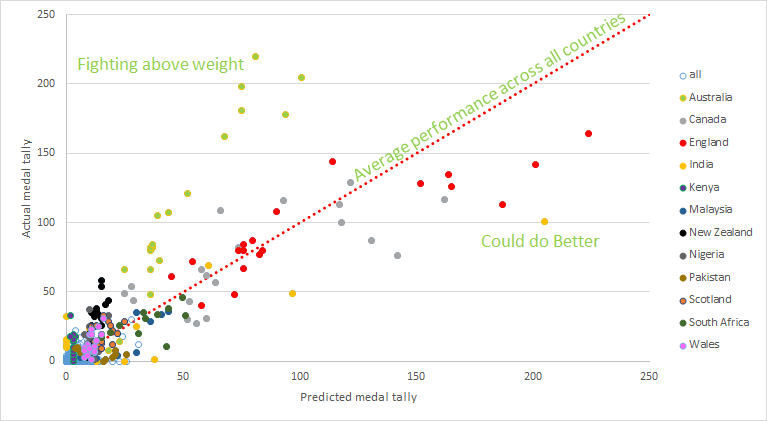 Figure 1: Predicted versus actual medal tally for all Commonwealth Games. Above the line are countries that perform beyond expectations. 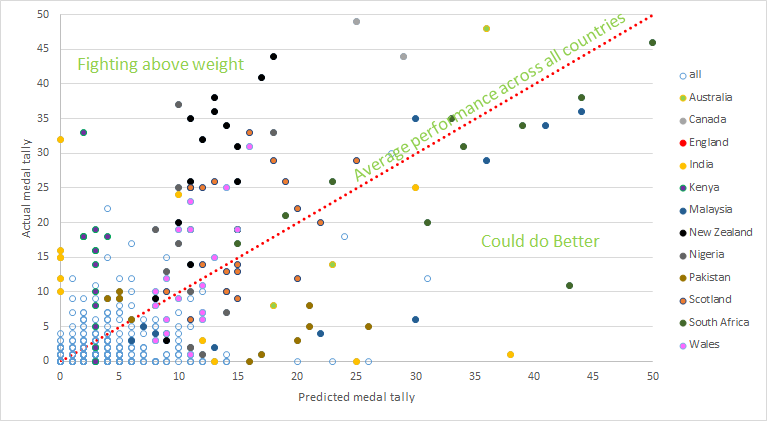 Figure 2: Predicted versus actual medal tally for all Commonwealth Games – Figure 1 zoomed in.

I have applied the simple regression model to projected 2014 GDP figures to predict what might happen in Glasgow over the next month. Well not quite, given that we know from Figure 1, some countries consistently out-perform others, I have adjusted the likely result for 2014 based on past results. To adjust the model prediction, I looked at the slope of the line through the points for each country (forced through the origin). The deviation in this line from 1 is a measure of the countries ‘sportiness’ – greater than 1 for over achievers and less than 1 for below average performers. I used the country sportiness scale to then adjust my base prediction. From Figure 3 you can see by applying the country specific finessing to the basic model prediction of past results improves the fit quite a lot (yellow points are closer to the line of perfect agreement than the green points). 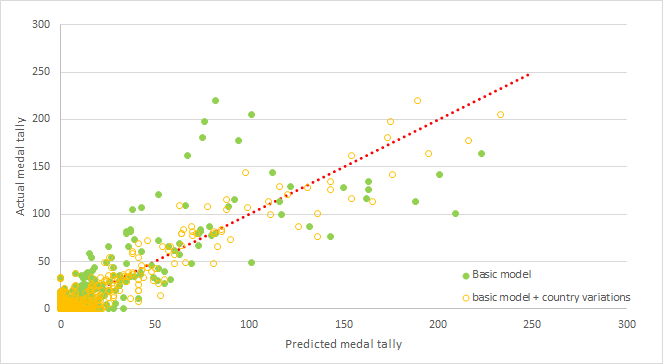 Finessing a model to fit existing data is one thing, but how well does it predict the future? As a test I have used the basic model and the refined model which includes the country ‘sportiness’ variations to predict the medal tally for the 2014 games (Table 1). If countries perform to the average of their opportunities based on the collective performance of all countries in past games, then India will win (thanks to their rapidly growing GDP), followed by England, Canada and then Australia. However if countries maintain their historic level of sportiness then I predict that Australia will win the medal tally, followed closely by India, England and Canada.

*The medals do not add up to the total because they are predicted with separate and simple models – keep in mind I’m reserving the right to a 30% error, so this covers the adding errors.

# these numbers are updated from my initial post because I originally used the listed events for 2014 from www.thecgf.com (197 events). But it turns out that there are actually 261 events so the numbers have been scaled up for this revised post.

This collective Commonwealth Games and GDP data set is available on Truii.com under the sample data/blog library. This is a pretty interesting collation with the medal results by country for all 19 games as well population estimates and GDP estimates through time.

The viz’s are easy to make . All you need to do is create a free Truii account to create and publish your own data visualizations.

Don’t forget to sign up to Truii’s news and posts (form on the right).