There is a lot of hand wringing about the state of the current Australian Cricket team. Especially the batting line up. Anyone who has scored a decent innings in grade or Sheffield Shield cricket is quickly offered up as the new hero who needs to be parachuted into the top 6.

I argue that it is not runs alone that are important, but the manner in which you score them. Scoring runs on a flat deck against a weak opposition is great for your career average but isn’t a true test of your mettle.  A truly great batsman can grind out an innings when all around him fail. The Bannerman ratio might just be the metric that defines truly outstanding batting performances. 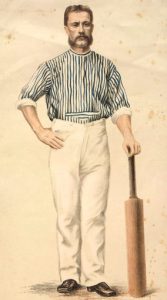 This amazing ratio of runs contributed by a single batsman (0.67) still stands as the single highest contribution of an individual to an innings total (hence it is called the Bannerman ratio). When compiling the Bannerman ratio only completed innings are considered. Smashing out a quick 200 and declaring at 4 for doesn’t count as a completed innings because not all batsmen got a chance to bat.

Many of the current Australian batting line up do not have a long international career, so we have looked at the Australian domestic cricket results for 2017-18 and the 2018-19 season to December 2018. For every shield match we have picked out the outstanding batting performances for each completed innings. The outstanding bating performance is top scorer or near tie top score, where you must have scored at least 50 runs. We have defined a completed innings as 8 or more wickets down. Through this analysis we came up with 118 good batting innings produced by 49 different players over the last season and half of Sheffield Shield games.

Demonstrating the ability to have an outstanding innings is important. However, consistently scoring runs is also critical. So we have created a combined score by simply multiplying the Bannerman ratio by the player’s Sheffield Shield average to create the Bannerman Ratio x Average (BRA) score.

Table 2 has players listed according to their BRA rank (the top players have produced an outstanding batting innings and consistently scored runs). Members of the Australian Mens squad (as listed by Cricket Australia) have been highlighted. Bare in mind, with the current state of Australian cricket the squad seems to change every second day, so this is just a rough team list.

Pucovski stands at the top of the list as a bolter. But before you sign him up as the new opener just remember that he has only played 5 Shield games.

Before we rush Finch and Carey into the test team based on short cricket form, we should note how far down the ranking they are as shield batsmen.

I don’t know what Maxwell has to do to get in the test team – he is clearly capable of creating an outstanding innings in long form game and has a good average (45.9). Just because he can be a slogger when called on in the short form, doesn’t mean he is a slogger in long form.

What is also interesting is that several bowling all-rounders have made the list (Stoinis, Wildermuth, Zampa) indicating that they have potential at number 8 and 9 to hold up an end.

Maybe the Bannerman ratio isn’t the greatest single cricket stat, but it is interesting to have another way to sort the wheat from the chaff instead of just batting average and strike rate.

The visualisations in this post are contained within their own Dashboard. You can link to the dashboard, or use the shortcode from each viz to embed or link to specific Viz’s in another web page. You can simply ‘like’ any of the visualisations to post them on your social media feed.
The viz’s are easy to make . All you need to do is create a free Truii account to create and publish your own data visualizations.
Don’t forget to sign up to Truii’s news and posts (form on the right).

T20 Cricket: Should you bat first?