Blog - Latest News
You are here: Home1 / Data Curio Blog2 / Sports Statistics3 / US College Football: which coaches are nervous in 2014?

Which football coaches are overpaid and which are good value in US College Football? College football is a high stakes game with the best coaches in the top conferences getting rather impressively compensated. If this is an open market, then presumably the best coaches get paid the most. So we thought, that it would be interesting to have a look at the data to see what are the key features that get you a sweet pay deal – and also have a look at those coaches that may not be performing up to their pay packet.

We used the www.coacheshotseat.com data for coach’s compensation (let’s call it salary), their career form (win/loss) and their form with their current club. We also used the US Department of Education data to see the overall football revenue (2012) for each club. The combined data set is available in Truii.com under sample data/blogs.

The first and most obvious thing that determines a coach’s salary is which team they coach (Figure 1). The head coach salary plotted against the 2012 football revenue shows a pretty clear trend with 75% of the variance in coach salary explained simply by the college they are attached to. This seems pretty self-evident – The wealthiest colleges can afford to pay the highest wages to get the best coach. I presume that the same applies generally in business – the more a company earns, the more they can afford to pay the CEO.
In Figure 1 it looks like the ‘base salary’ of the head coach in 2013 was about 6.8% of the total revenue for 2012. What is also interesting to note is the huge range in football revenues between the different conferences (Big 12 vs MAC). There is also a huge spread within some conferences, consider the Texas Longhorns (far right) $109M revenue in 2012 compared to the Kansas Jayhawks with a measly $21M revenue in 2012. 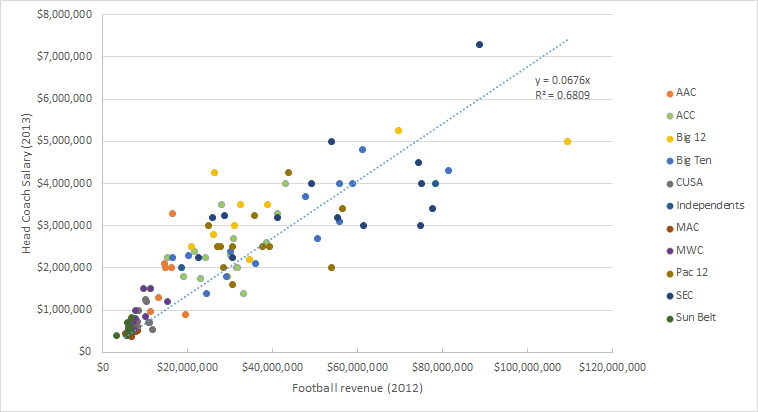 Whilst a simple line of best fit through the data shows a trend across the industry, what about the individual coaches – how come Art Briles (Head Coach of the Baylor Bears) gets compensated $4.25M according to (link), when one would expect closer to about $1.8M based on the Baylor Bears revenue and the industry average in Figure 1

The simple answer might be ‘because Art Briles is a great coach’, however there are probably other factors also involved – he may also have a great agent who can drive a good deal, the Baylor Bears management may be going through some strategic rebuilding phase and a myriad of other factors. Let’s just think about the ‘great coach’ component as this is something we may be able to try and quantify.

What makes a great coach?

There is an endless discussion about the qualities of a great coach. To keep it simple, let’s just consider their career form (win/loss) and form with their current college, and recent form (2013 win/loss). Presumably, a coach with a high career win%, a high win% with their current college and a good season last year (high 2013 win%) should justifiably be paid above the average. We have combined these career, school and previous year’s performance figures into a simple additive regression model.

We excluded 20 coaches that we didn’t have the complete data for. Of the remaining 103 coaches, 83% of the variance in head coach salary is explained by college revenue and coach form. These variables are correlated so we cannot really tease out the relative importance of each without some further statistics. For example, wealthy schools can attract better players and hence win more despite the coach.

Get a new agent

If we assume that the published compensation figures are accurate and about 83% of the variance in compensation is explained by the revenue of your college and your career performance, then your agent must play a big part in landing you a sweet deal. On average they account for the 17% variation in salary, but on an individual basis some coaches seem to have exceptionally good agents (and others should maybe drive a harder bargain!). Tables 1 and 2 show the salary multiplier – that is the number of times the coach salary exceeds the base salary predicted based on their college’s 2012 revenue, their career, school and 2013 form of the coach.

Table 1: Most well paid college football head coaches (getting paid up to double what you would expect).

Table 2: Bottom Paid College football coaches: (getting paid half or less than you would expect). 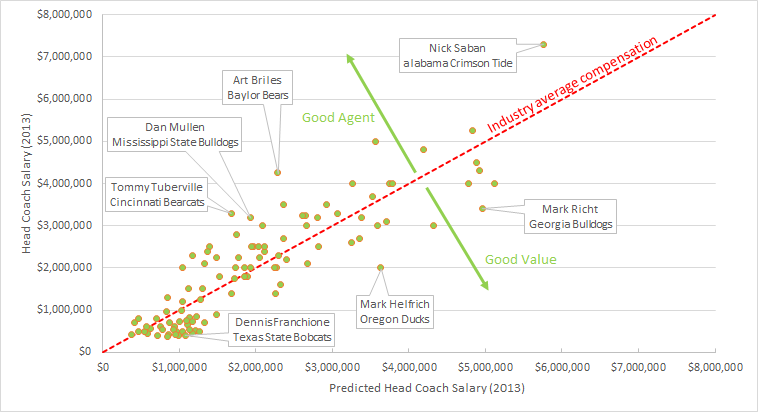 To sum up, wealthy colleges pay the most for their coaches because they can and whilst career and recent form is helpful in getting paid well, the variance of college football salaries is still rather vast. I wonder how surprised I may be to attempt the same data correlations for my sport of field hockey??

AFL: Why do you get a point for missing?